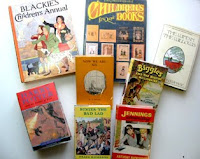 There are many reasons to collect children's books: for the amusing story line; for the charming illustrations or to evoke a childhood memory. Any one of these may lead to the purchase of a book which rises in value and can be seen as an investment. Selecting a book to buy as an investment first, and for interest second, is much harder. Which of today's new books will be The Wind in The Willows of tomorrow? Which of today's illustrators is the Arthur Rackham of 2020? It's impossible to provide a definitive answer but the purpose of this article is to provide some guidelines.

First and foremost - collect something that gives you enjoyment because that way, even if the books don't go up in value, at least you will have derived pleasure from your hobby! Maybe the soft humour of the Winnie-The-Pooh books which one appreciates just as much as an adult as a child; perhaps the hijinks of the schoolboy characters Billy Bunter, Just William or Jennings. Maybe the beautiful colour illustrations of artists such as Edmund Dulac , Arthur Rackham, Maxfield Parrish or Kay Nielsen appeal

to you; perhaps you prefer the gentle tales of 19th and early 20th century heroines such as Meg, Beth, Jo and Amy in Louisa May Alcott's Little Women and L.M. Montgomery's Anne of Green Gables or the fantasy worlds of J.R.R. Tolkien and Baum's Wizard of Oz. And of course, not forgetting the world war two exploits of Biggles, Gimlet and Worrals or the adventures of Enid Blyton's Famous Five and Malcolm Saville's Lone Piners

Whatever your taste there is something for everyone in the world of children's books.

Book collectors like "Firsts":- First Editions; First Printings; an Author's First book; the First book illustrated by a particular artist; the First of the book in a particular format. In some instances the first appearances of fictional characters were not in books but in magazines or newspapers. For example, Biggles first appeared in the short story "The White Fokker", published in April 1932 in the aviation magazine Popular Flyer edited by W.E. Johns; Just William stories were first serialised in Home magazine, followed by Happy Mag; and Rupert Bear first appeared as a cartoon strip in the Daily Express newspaper in 1920. Ephemeral items such as those mentioned above are especially sought after as, being so fragile, they rarely survived.

While first editions are particularly desirable in the collecting world, all books have first editions and the first edition of many, many books remains worthless. An outstanding example of this contrast is in the Harry Potter books of J.K. Rowling. Her first book, Harry Potter and the Philosopher's Stone, had a print run of just 500 copies and many of these were distributed to libraries. This first printing is now valued between £16,000 and £25,000 while a first printing of the last in the series, Harry Potter and the Deathly Hallows, can be purchased for just a few pounds and will probably never increase in value as the print run was so large. Phillip Pullman is another very collectable modern author whose trilogy "His Dark Materials", originally sold in the mid-1990s for a few pounds, now commands prices of many hundreds and, in the case of signed copies, thousands of pounds.

Rarity alone means nothing. For example, Joe Public's vanity publishing of 200 copies of awful poetry may be rare but will have no value and is unlikely ever to have any value, simply because no-one wants to purchase it. The Internet has also made what are truly rare books seem common. "On the net" there may be five copies of a book - so it appears to be "common" - but these are the only five worldwide and many booksellers may only have possessed one copy in 10 years.

Condition is everything. Whatever you decide to collect for investment, purchase the best condition copy you can afford. A book worth £1500 in fine condition will only be worth £50 in poor condition and only then if it is a particularly collectable book. Also, bear in mind that a poor condition book will not be so attractive to a purchaser when you wish to sell it on. 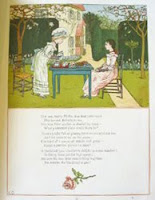 The presence of the original dustwrapper can dramatically increase the value of many children's books. Some examples: the 1881 1st edition of A Day In A Child's Life by Kate Greenaway will be priced at around £100, but with its scarce original dustwrapper the value is increased to around £300; the first Rupert Bear annual, The New Adventures of Rupert, published in 1936, will cost you around £500-£600 unjacketed, but with its original pictorial wrapper will be priced between £1000 and £3000 depending on the condition of the wrapper. A note of caution - beware of "facsimile" or photocopy dustwrappers - these may make a book look good on the shelf but add very little to the value.

Books signed by the author or illustrator are generally more valuable and especially if the book is a limited edition copy or private printing. For instance, a first edition of The Tale of Peter Rabbit by Beatrix Potter, originally priced at one shilling (5 pence today) is valued now at around £5000. The privately printed edition of only 250 copies is worth £50,000 while the second privately printed edition of a further 200 copies is valued at £25,000 - a significant return on investment by any standards! The Vicar of Wakefield illustrated by Arthur Rackham can be purchased for around £120 without a dustjacket, around £200 with a dustjacket but the limited edition of 775 copies signed by the artist commands a much higher price of around £1000. 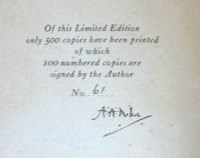 However beware - the Irish poet Seamus Heaney once said that he had signed so many books that the unsigned ones were probably more rare! In addition, the prolific bookshop launch signers are certainly not adding value as the books are published in the thousands and the authors sign all of them!

Be prepared to invest over a long period, at least five years and possibly twenty. All of the books mentioned in this article have increased in value over the years and likely will continue to do so, and there are numerous others to look out for. This is where the fun begins - who will be the Arthur Rackham, J.R.R. Tolkien, or Phillip Pullman of the future?

In summary buy books because you like them, be selective as to edition and condition and the chances are you will, over time, have a worthwhile and an increased in value collection.

Contributed by Chris Tomaszewski of Stella & Rose's Books and all images including the signed limited edition of 'When We Were Very Young' are from their stock.
Posted by Juxtabook at 7:38 PM

I love the information. I have some very old books that are not in good condition but have excellent art work such as plates. Are these worth anything? Also, I have a copy of the Vicar of Wakefield, where can I sell it?