It is Buy a Friend a Book week time again. I am giving away a collection of short stories by Margaret Atwood: Dancing Girls. It is a 1980s paperback with the rather jolly Sally Geeve designed cover.

To enter the draw for Dancing Girls just leave a comment below but not anonymously please else it it is a bit difficult to do the draw! You have until the end of Wednesday 8th October UK time to enter.

The perils of holiday reading - especially if you are a book

Setting off on the train to Italy this summer obviously required some reading matter to while away the tedium of all those lovely views. So having enjoyed Penelope Lively's Spiderweb earlier this year, I decided to take another PL novel, The Photograph, to keep me entertained.

The train services all ran to time, all four of them, all the way from Yorkshire to Lombardy. Unbelievable! There was no sitting around on stations and actually I was too busy looking out of the window to open my book, or even to get it out of my rucksack.

In the luxury that is the Stendhal sleeper train you are presented with a complimentary bottle of mineral water. Between the four of us we had consumed three but had one left unopened. After living in Yorkshire for over a decade the local habit of thrift has been caught so as we left I grabbed the bottle and shoved it into my rucksack.

Two hours later, husband having successfully negotiated the trauma of car hire, and the actually-not-so-bad driving in Italian traffic, we arrived at our holiday destination. I unpacked rucksack, bottle still intact but … pushing it into the rucksack had rolled the edge of the paper label up depositing horrible thick strong glue, melted in the Italian heat, all over the front of my paperback Penelope Lively. Horror of horrors, and me, abroad, without a suitable solvent to my name. I tried kitchen fixes of oil and alcohol but the glue wouldn't budge, and I realised that, even though unread, my poor book need me to have the guts to do the decent thing. Unfortunately I don't have the guts, so husband was called to put it out of its misery.

He emerged from the kitchen a few minutes later with this: 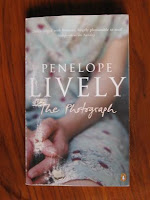 Would you like that in close-up? Not for the faint-hearted, please look away if feeling weak… 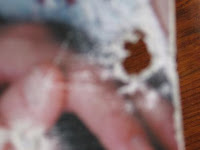 "The glue's off", he said. Well true, but I could now read the blurb on the first prelim without actually turning the cover. I weakly enquired how he had managed it, "Brillo pad", was the reply.

You'll be pleased to know that back home I have all the usual tried, tested and book-friendly materials in the bookdealer's armoury for removing sticky stuff, and brillo pads never cross the bookroom threshold.

The short list for the Man Booker Prize has now been announced:


Now the Booker is something on which I am spectacularly ill-qualified to comment. Whilst I could tell you in detail about the "difficult" horse stories of Helen Griffiths, or the non-appearance in bibliographies of the Junior Country Life Library, when it comes to modern literature of the more challenging kind, I am floundering. Actually, "floundering" implies that I've made an attempt at something with which to flounder, and I haven't.

So, I'm sorry that this post is me-me-me rather than an intelligent discussion of the Booker nominees, but I have a challenge for the blog's readers. Vote for the one book on the Booker shortlist that you think I should read, and I promise, faithfully, that I will read it. I might even go to Simon French for a glossy first, though I think it might feel a little uneasy amongst my fine collection of pony books: but read it I will, despite any nervous shying and refusing to be caught it might indulge in, aghast at the company I am forcing it to keep.
Posted by Jane Badger at 11:09 AM 2 comments: 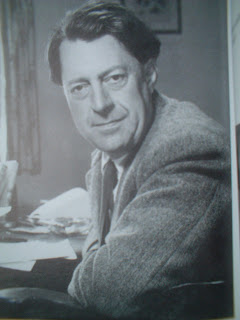 If you live in the Tewkesbury area you may have heard of John Moore - there is a museum in his name in the town, but it's tucked away so you could easily miss it. There is even a John Moore society but only a very few of the forty books he wrote are still in print and he has been unfairly neglected for a long while. Which is a shame, because he was one of the earliest writers to draw attention to conservation issues, and in a relatively short life (he died at the age of 60 in 1967 of cancer) he packed in an awful lot; as well as writing many novels he founded the Tewkesbury Festival of Plays and the Cheltenham Literary festival, covered the Spanish Civil War as a journalist on the Republican side, worked his passage on a tramp steamer and hitchhiked round Europe, flew in the Fleet Air Arm and worked for the War Office during the war, wrote a couple of plays, was chairman of the Society of Authors, collected (and wrote knowledgeably about) moths and butterflies, broadcast regularly on the BBC, wrote any amount of articles for various publications, as well as a weekly column in the Birmingham Evening Mail, tried his hand at every country pursuit imaginable and generally managed to stay one step ahead of his creditors - he always believed in the principle that if you've got it, spend it!

If you've never read a John Moore book and would like to know why I rate him so highly then I'd recommend you start with 'Portrait of Elmbury', a thinly disguised look at Tewkesbury, and the book that made his name when it was first published in 1945. It was the first part of a trilogy and this and the second and third parts ('Brensham village' and 'The blue field') formed the basis of a BBC serial 'Brensham People' which starred Michael Hordern and was very well received when broadcast in the late 1970's. The Brensham trilogy books are fairly easy to get hold of as all three books have been reprinted several times. If you like the Brensham books then you will also like his books of country pieces - 'The season of the year', 'Come rain, come shine', 'Man and bird and beast' and 'The year of the pigeons'. 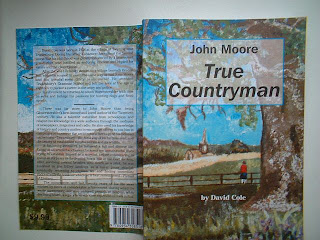 If you don't like reading about country matters you might instead try 'You English words' which is one of the best books on the delights of the English language you'll ever read, and, although long out of print, still not too difficult to find.

John Moore has finally had his biography written ('John Moore, true countryman' by David Cole) and a fine effort it is too, a 'warts and all' portrait of a fascinating character.
Posted by Roger Thomas at 1:03 PM 2 comments:

Booktrust have just announced the shortlist for their new prize: The Roald Dahl Funny Prize. A brilliant idea, I think. The things that made you laugh as a child tend to stick with you.

What struck me as I looked at the shortlists was that amongst the Georgia Nicholsons (whom I do like, a lot) and Julia Donaldsons, there was good old Paddington. To be precise, Paddington Here and Now.

When I was young, there was a bear divide in our household. My sister was a big Paddington fan, but Gwynedd Rae's Mary Plain was the bear for me. I loved Mary and the Bear Pit at Bern (deeply politically uncorrect now, I'm sure), and the Twins and Frisca. Paddington made me smile, but Mary made me laugh.

Is there a William/Jennings divide as well as a bear one, I wonder? William never did much for me - always something of the thug about William, I felt, but I loved Jennings and Darbishire. It was a source of great grief to my OH and me that neither of our children showed the remotest spark of attraction to Jennings; nor even Willans and Searle's Molesworth.

I don't think it can be the difference in types of school which gets them: I went to a 1960s built grammar school, not a private school like St Custard's - but for them it simply doesn't click. I even went through a period of writing sub-Molesworth stuff for the school magazine (which the sixth form editors loved, but my English teacher loathed. "Jane must learn to curb her eccentricity," she wrote on my report. Bearing in mind I now specialise in pony books I think you can see that I failed to take much notice of that - died in the wool bolshiness which failed to win me the school deportment girdle, let alone The Mrs Joyful Prize for Raffia Work.)

I can still quote reams of Down With Skool (chiz, chiz), and was completely bowled over by this wonderful updating of Molesworth by the utterly brilliant Alice Dryden.

So, who makes you laugh? Should I give William another try?
Posted by Jane Badger at 10:53 AM 6 comments: