Further Famous Five news: on the afternoon of August 10 there will be readings from Five Go to Sea in the courtyard of Tintagel Castle, and I can't think of a more evocative setting for storytelling. Mike O'Connor, renowned storyteller, musician, and researcher into Cornwall's folklore and musical heritage, will be telling the tales.
Posted by bagot books at 10:42 PM 1 comment: 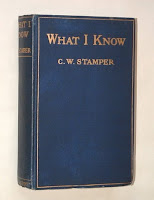 In 1913 Mills and Boon published a book called ‘What I Know’, by C. W. Stamper, the memoirs of a chauffeur/motor engineer to King Edward VII from 1905-10, with an acknowledgement in the foreword to Dornford Yates 'but for whose tireless assistance these memories might never have been published'.

Dornford Yates (real name Cecil William Mercer) was at this time still a practising barrister but he was short of work and had been writing stories for the Windsor Magazine, a popular monthly, since 1911. His first book in his own name however, a collection of these short stories, would not appear until 1914. After WW1 he went on to give up the bar, became a full-time writer and wrote a further thirty-three books.

Although no acknowledgement of ‘What I Know’ ever appeared in Dornford Yates’ other works it was presumed that he was the ghost-writer but there was never any certainty. In 1982 A. J. Smithers biography of Dornford Yates failed to mention the title at all although there was a note in the preface to the 2nd edition in 1985 that the existence of the book had since come to his notice. Yates himself never mentioned it in his quasi-autobiographies.

The full story of how the connection has been established, in Yates' own hand, can be seen at A Book for all Reasons
Posted by G. A. Michael Sims at 6:35 PM No comments: 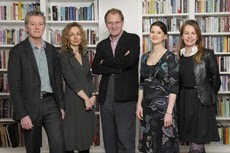 The Man Booker judges have announced the long list of thirteen titles. This years judges, chaired by Andrew Motion former Poet Laureate, are Rosie Blau, Literary Editor of the Financial Times; Deborah Bull, formerly a dancer, now Creative Director of the Royal Opera House as well as a writer and broadcaster; Tom Sutcliffe, journalist, broadcaster and author and Frances Wilson, biographer and critic.

Three authors have been shortlisted before: David Mitchell (twice shortlisted in 2001 for number9dream and in 2004 for Cloud Atlas), Damon Galgut (in 2003 for The Good Doctor) and Rose Tremain (shortlisted in 1989 for Restoration). She was also a judge for the Booker Prize in 1988 and 2000.

Howard Jacobson has been longlisted twice for his book Kalooki Nights in 2006 and for Who's Sorry Now? in 2002.

The long listed titles are:

Parrot and Olivier in America by Peter Carey (Faber and Faber)


The Stars in the Bright Sky by Alan Warner (Random House - Jonathan Cape)
Posted by Juxtabook at 7:01 PM No comments:

Enid Blyton for the Twenty-first Century 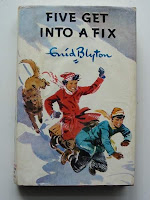 By Nigel of Bagot Books.

In Saturday’s Guardian there was an article about Enid Blyton’s Famous Five books getting a ‘makeover’ – changing some of the terminology to fit modern times, for example ‘mother’ to ‘mum’, ‘mercy me’ to ‘oh no’, and ‘fellow’ to ‘old man’. The new language is supposed to be ‘timeless’ according to Hodder, but presumably it’s as timeless as today – or rather, today’s children’s language as adult editors imagine it. Presumably in fifty years’ time the language of speech in these books will seem not only dated, but anachronistic, as the rest of the books are remaining unchanged. The reasoning is that the language puts children off reading the books, but I think this underestimates the intelligence of children. (I like this comment from Tony Summerfield, who runs the Enid Blyton Society: ‘How can you change Nobby to Ned and yet leave Dick and Fanny?’)

Reads more thoughts on the modernising of Enid Blyton by Bagot Books here.

This post is illustrated by a book from the stock of Stella and Rose's Books.
Posted by Juxtabook at 6:51 PM No comments: 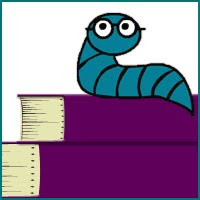 The RNIB have a money raising scheme The Really Good Read. Because only 5 per cent of books are available in formats that blind and partially sighted people can read the RNIB is inviting readers to join book lovers all over the UK going bonkers about books to raise money for RNIB.

The RNIB fund-raising suggestions include book clubs, literary pub quizes, bring and buy book sales and more. You will need to register on the The Really Good Read website for a fundraising pack.
Posted by Juxtabook at 11:33 AM No comments:

The winners of the British Archaeology Awards were announced this evening. The Best Archaeological Book was deemed to be Britain's Lost World: the re-discovery of Doggerland by Vince Gaffney, Simon Fitch & David Smith, published by the Council for British Archaeology.
The other winners are listed on the award's website.
Posted by bagot books at 10:20 PM No comments:

Email ThisBlogThis!Share to TwitterShare to FacebookShare to Pinterest
Labels: archaeology

Every year the residents of Waverton make an award to the best British debut novel published in the previous 12 months. 61 novels were submitted for the 2009/10 Waverton Good Read Award.

The result of this year's vote was announced at the Waverton Carnival on 3rd July. The winner of the 2009/10 Waverton Good Read Award is Andrew Sharp for his novel The Ghosts of Eden. 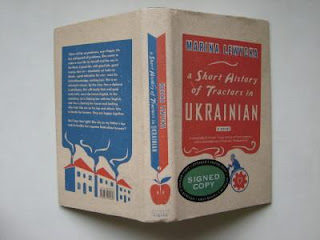 The illustration is a signed first edition of A Short History of Tractors in Ukrainian by Marina Lewycka from the stock of Aucott & Thomas.

At the time of writing Diaskari Books have two first editions of Child 44 by Tom Rob Smith in stock. (Contact chris.tyzack@btinternet.com )
Posted by Juxtabook at 7:57 PM No comments: 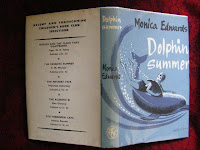 Jane Badger tells her own story on her blog Books, Mud and Compost of how she began buying and selling. She also has a lovely celebratory pony image on her website Jane Badger Books and details of The Pony Books Competition - test your pony book knowledge with 80 questions on everything from colours to characters. The top scorer will win a £50 book token for her site, and also there is a special offer of 10% off all orders on the sales site for a month!

The Dolphin Summer by Monica Edwards shown is a Children's Book Club edition of one of Edward's rarer titles sold by Jane Badger Books.

It is ten years since C L Hawley (me!) started trading. After struggling to find academic books when doing an MA whilst living in a rural backwater I began tentatively buying and selling used and recently out of print literary criticism in July 2000. The first book I sold was Seamus Heaney by fellow poet Blake Morrison. I gave up the day job nine years ago and joined Ibooknet the same year. I sell from my own site C L Hawley Books and blog at Juxtabook. To celebrate this month I have special offers on my website and on Juxtabook so do please visit.

The book shown is the first publication of The Loved One by Evelyn Waugh, published in the literary and arts periodical Horizon, edited by Cyril Connolly and available from C L Hawley Books.
Posted by Juxtabook at 7:44 PM No comments:

Nothing to Envy by Barbara Demick, a Los Angeles Times journalist, has won the £20,000 BBC Samuel Johnson Prize for non-fiction. The account of life in North Korea drawn from interviews with defectors was described by Evan Davis, presenter of BBC Radio 4's Today show and chairman of the judges, as "gripping and moving".

Nothing to Envy beat five other works to the prize.

•Alex’s Adventures in Numberland by Alex Bellos (Bloomsbury)
•Nothing to Envy: Real Lives in North Korea by Barbara Demick (Granta)
•Blood Knots by Luke Jennings (Atlantic Books)
•Too Big to Fail by Andrew Ross Sorkin (Penguin, Allen Lane)
•A Gambling Man by Jenny Uglow (Faber and Faber)
•Catching Fire: How Cooking made us Human by Richard Wrangham (Profile Books)
Posted by Juxtabook at 8:57 PM No comments: