Some Ibooknet sellers give a run down of their best reads of the year:

Best reads of the year from Philip of Lund Theological Books

I love Montaigne's Essays, and this book fills in a lot of background, historical and philosophical.

Magisterial and enjoyable, but too big for the bath.

Lovely sequel to Swift's tale of Gulliver in Lilliput. Set in Northamptonshire. Originally published in the 1960s I think.

Published around 1992, this science fiction novel set in a disfunctioning near future in the USA foretells all sorts of developments which have come to pass in the cyberworld of our time, and some which have almost done so. I was bowled over by this author, and have another of his books lined up to read in the new year. A rattling good read.

Armstrong is the best populariser of religious thought I know of today. Despite my having two degrees in theology I learnt an awful lot from this well-written book.

The Bottom Billion: Why the Poorest Countries are Failing and What Can Be Done About It. Paul Collier. Oxford UP 2008

The title says it all, but this book has won prizes for its concise analysis of the problems of the poorest countries and its suggested remedies. Quite short, and very readable.

I had a summer of reading post-apocalyptic/catastrophe novels. I particularly liked Walter M. Miller's A Canticle for Leibowitz, George R. Stewart's Earth Abides and Nevil Shute's On the Beach (although this last was a bit depressing even for this genre!). The pick of the bunch was Justin Cronin's The Passage. It's a hefty book at some 750 pages, so again, not one for the bath, but it is the first book for a long time that I've been so engrossed by that a couple of hours solid reading has passed in a flash. One can see the influence of Earth Abides in it and it bears a comparison to (and possibly even surpasses) Stephen King's The Stand. So good was it that when I finished it, I was sorely tempted to start it again.

Rather less apocalyptic was Barbara of March House Books' choice:

The Little Round House by Marion St. John Webb (1956 edition with illustrations by Jean Walmsley Heap). I’ve sold lots of copies over the years and decided it was time to read it! Children’s story about an ordinary (or extraordinary!) pillar-box and the adventures of Mr. Papingay, the home-made fairy, Mrs. Tupp and all the rest of them.

Notes from An Exhibition by Patrick Gale. Rachel Kelly is an artist full of creative highs and crippling lows she’s also something of an enigma to her husband and four children. So when she is found dead in her Penzance Studio, leaving behind some extraordinary new paintings, there’s a painful need for answers.

Passing for Normal: Tourette’s OCD and growing up crazy by Amy Wilensky – memoir of a young woman’s struggle to come to terms with a life plagued by irrational behaviour.

The Life and Works of Alfred Bestall illustrator of Rupert Bear by Caroline G Bott – more for dipping into when time allows but an interesting read none the less.

Nigel from Bagot Books was able to narrow his choice down to just one interesting volume:

My favourite book of 2010 must be Peter Orlando Hutchinson's
Diary of a Devon Antiquary 1871-1894 (9780857040756).
It is the second volume of a selection from his journals, illustrated with
his own watercolours and sketches: volume one was published ten years ago so
I was pleased to read v.2 at last. He's best-remembered as an antiquary and water colourist, but took an interest in anything novel or unusual,
including geology, astronomy, meteorology, the Enclosures, new railways,
etc; in his later years he became an archaeologist rather than an antiquary,
recording and illustrating discoveries in their context, rather than just
collecting them. He was kind to animals, helpful to people less fortunate
than himself, he played the French horn and flute, and he was delightfully
eccentric. He had a cannon which had been captured from pirates, and would
wheel it round Sidmouth in the 1850s firing it; and at the age of 64, while
on a picnic with four friends, he surreptitiously put on a false nose and a
pair of large goggle-eyed spectacles 'much to the amusement of the ladies'.
He spent a lot of his later life building a new house out of bits of old
churches - the result wasn't very comfortable, but it's still there in
Sidmouth.
Posted by Juxtabook at 3:01 PM No comments:

Email ThisBlogThis!Share to TwitterShare to FacebookShare to Pinterest
Labels: booksellers best reads of 2010

A first edition of John James Audubon’s Birds of America has just been auctioned at Sotheby’s for £7,000,000. Lord Hesketh was selling off some of his library (presumably he hasn’t the room since he sold his family seat, Easton Neston, five years ago).
The book, in four volumes in contemporary diced Russia gilt, comes with a little cabinet to keep them in, and was expected to go for £4-6 million. There are only 119 known complete copies, and nearly all of them are owned by institutions.
The nearest I have been to a copy was in Temple Newsam in Leeds, where it’s possible to see where Lady Hertford had the one volume she owned cut up so she could have the pretty birds pasted on to her Chinese wallpaper, as described in my blog.
Posted by bagot books at 12:49 PM No comments: 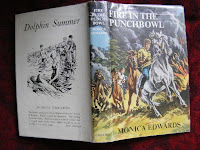 As lots of friends and relatives can be difficult to buy a gift for, gift vouchers and gift cards are very useful. An number of ibooknet sellers offer gift cards on their own websites, available to purchase online and in a wide variety of denominations. They can be spent online on the dealer's website and most dealers ship books to most countries. Here are a few dealers who sell gift cards, with a brief outline of the dealer's specialism, so you can select the card most likely to delight your recipient.

Bagot Books carries a general stock with an emphasis on UK travel/topography/history.

Jane Badger Books carries a wide range of pony books: everything from Ruby Ferguson to the Pullein-Thompsons, with many interesting detours between.

Amwell Book Company carries modern art, architecture and photography and has a shop in Central London. You can read more about their shop here.

East Riding Books carries books on all aspects of music.

The pictured books are:

a first edition of Fire in the Punchbowl from the stock of Jane Badger Books ;

and The Last Books of H G Wells: The Happy Turning and Mind at the End of Its Tether

from the stock of Bagot Books.

N.B. individual dealers have their own terms and conditions so do read the individual websites properly and email the dealer if you are unsure.
Posted by Juxtabook at 2:51 PM 1 comment:

My colleague Barbara at March House Books has a lovely display on her website - see here. I can also recommend Peakirk Books and Stella and Roses books for vintage children's books. The lovely Jane of Jane Badger Books can supply you with vintage pony books at all prices and her website is mine of information and reviews. 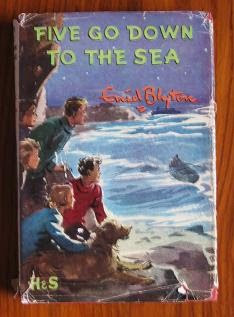 I sell a small amount of children's myself too on C L Hawley Books. Go to our browse categories page and under C you'll find several sections of children's books.

Most good indie booksellers will happily supply photos of books by email if you ask. Very few websites have everything photographed as stock is individual and changes so fast.


The range of images at the top are of vintage children's books at March House Books from Barbara's range of gifts under £30. The Famous Five - Five Go Down to the Sea is from C L Hawley Books.
Posted by Juxtabook at 1:19 PM 1 comment: