Children's novelist Dick King-Smith has died aged 88. Born in 1922 Gloucestershire, Mr King-Smith fought in Italy with the Grenadier Guards in World War II, before returning to England where he was a farmer for 20 years beginning to publish books only in his 50s.

His first book, The Fox Busters, was published in 1978 and was followed by dozens of others. His best know is probably The Sheep-Pig after it was made into the hit film Babe. Other titles include the Sophie series, The Invisible Dog, Harriet the Hare and The Witch of Blackberry Bottom.

Dick King-Smith was made an OBE in December 2009.

Illustrated by a first edition of Sophie Hits Six by Dick King-Smith, from the stock of Stella & Roses Books.
Posted by Juxtabook at 7:34 PM No comments:

Sales and Offers from Ibooknet booksellers 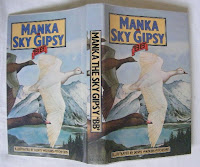