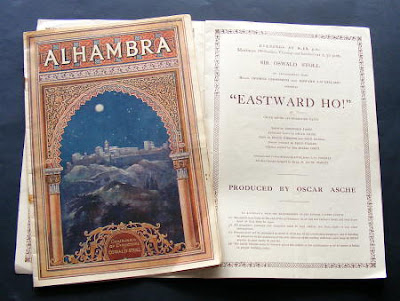 There has always seemed to be some mystery about the existence of a musical play by the novelist Dornford Yates (real name Cecil William Mercer) amongst his enthusiastic readers. It remained so until 1982 when his biographer, A. J. Smithers, included it in his list of the works of Dornford Yates. There it is shown as the author's second work, published in 1919 and titled 'Eastward Ho!', a musical comedy, written in conjunction with Oscar Asche.

Some reference sources refer to this play as a revival of the play of the same name by Ben Jonson, George Chapman and John Marston, a Jacobean drama set in 17th Century London that upset King James I. It isn't. This 'Eastward Ho!' is an entirely different and original work.

I think it almost certain that the Yates/Asche play was never published in book form and that it only existed, as do many plays, as working copies for the duration of the theatre production. My hunt for a copy of this allegedly published book has been unsuccessful. The British Library does not have a copy (which they should of every published work) although they do have some of the music, and in every other archive of printed works that I have checked it is similarly absent. I have, however, come across several ephemeral items about the production which have shed some light on the work. In isolation each does not mean a great deal but presented together they help to describe the circumstances of the writing and production.

How intriguing, I wish it hadn't been lost! I particularly like the photo of Ralph Lynn, with one huge eye. And if I ever have a grandson, I shall demand that he is named Marmalade.