Verily Anderson was an author whose writing received what her obituarist in The Times called "respectful attention". The daughter of a vicar, she was born in Edgbaston, and grew up in East Sussex, where she went to Normanhurst School. Here, whether you owned a horse or not, foxhunting was on the curriculum. Verily Anderson showed some musical talent, and was accepted at the Royal College of Music, but her time there ended abruptly. Her father stopped paying the fees when it became clear she would not succeed as a concert pianist.
As a child, she had been a keen guide, and had many badges. Using these as qualifications, she embarked on a varied series of jobs: designing toffee papers; a chauffeur, and by 1939, a sub-editor on The Guide, the Guides' magazine.
In 1940 she married Donald Anderson, a playwright, and the couple both became freelance writers. They had five children, and when Donald died in 1956, Verily Anderson had to support the family on her own. She wrote about bringing up her family on virtually nothing (the wonderfully named Spam Tomorrow as well as five others), and wrote the eight book Brownie series. Alas, the Brownie books were considered too exciting by the Girl Guide Association for it to support them. 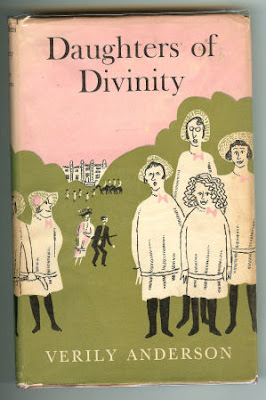 I had no Brownie experience with which to compare them, having not been allowed to join the Brownies, but I found the books completely enchanting as a child: they were a window into another world where girls worked together and had adventures. 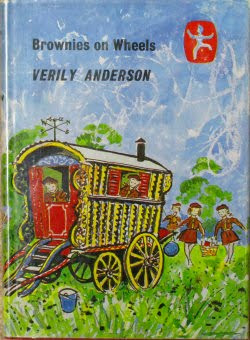 Verily Anderson carried on writing virtually until her death. The day before she died, she finished a book about Herstmonceux Castle.
This piece is illustrated with the following:
Daughters of Divinity: Hart-Davis, London, 1960. 1st edition hardback in dw, vg/vg. Very clean copy in d/w that has slightly browned in places. This book comes from Malcolm Saville's book collection, and contains the inscription "Malcolm Saville best wishes Verily Anderson" on fep. £70.00 Peakirk Books
Brownies on Wheels: Brockhampton Press, 1st edn, 1966. VG/VG. Very good book in very good dustjacket. No previous owner's name, pages clean, binding tight. Black and white illustrations by Edgar Norfield. Very good unclipped dustjacket (9/6) with minimal wear to spine tips and corners. A holiday for Brownies in a real gipsy caravan! The trek into the New Forest provides Amanda, Tulip, Lucinda and their Brownie friends with an exciting holiday, but it also proves how resourceful Brownies can be... £10.00 March House Books
Posted by Jane Badger at 9:46 AM